If you told teenage me that I'd become this hopeless romantic person, I would've laughed so hard. I was never into mushy romantic stuff. Now I literally squeal when I get inquiries as amazing as Ryan's. Ryan contacted me with no concrete plans, but with the vision of proposing to his dear Josie on a sailboat. I remember crossing fingers and wishing intensely that the sailboat proposal gig wouldn't fall through, while I hit that reply button. I also remember the excitement when I got booked that same afternoon: this was happening!

I was impressed by Ryan's organization and responsiveness during the planning session. Two days after booking, he had already come into contact with the Sandy Bottoms Sailing, and we were already talking logistics. He also wanted video footage of the proposal, so I recommended my friend Zuriel from Zura Films. After a few e-mail exchanges, we were all set!

How did we do it so Josie wouldn't suspect

There are many strategies to be inconspicuous on a venue or location. But this time, we would be sailing together for about 45 minutes to Icacos before proposing. So Ryan didn't tell Josie this was a private boat; instead, she thought this was a small sunset sailing tour. I arrived about 15 minutes before check-in time so that I could be on the ship first.

Upon our arrival at Marina del Rey in Fajardo, I met the charming couple Arturo and Katie, owners of the sailboat, and also our hosts for the evening. We made some banter regarding our job for the day and strategized on how to act casually during our sail. Then, Zuriel and Raymond from Zura Film arrived. We were very excited. Finally, our happy couple showed up: we shared a shy greeting and proceeded to intentionally "ignore" each other. I brought my boyfriend as an assistant/wingman, we pretended to be on a romantic date, not that hard when your work takes place on a sunset sail.

At some point, Josie went inside the boat for a quick restroom break, and we all shared two minutes of euphoria with Ryan. We wished him well and reassured we were ready and so excited for him. Then, the sail started, and we went back into stealth mode. Our sail eastward was beautiful, the day was perfectly sunny and breezy, and we were all doing some small talk as if we were getting to know each other that day. So sneaky!

Ryan would propose once we had moored on our destination. The Capitan starting to work the ropes would be our cue so that Zuriel would go downstairs, and Ryan would follow him to get his mic on. Then he asked me, the tourist girl looking out at the water, if I would take a snapshot with his cellphone of him and his girlfriend. After two or three pics, he held her hands and asked her to look at him instead. I took my camera out, and my photos tell the rest of the story better than my words do.

We kept on shooting until sunset. Then we sailed back to Fajardo, chatting about how epic the day was, getting to know a bit better about their love story, and of course, talking about weddings. I drove back home with a big smile on my face: after a decade of photographing love, I feel so privileged to witness so many epic love stories. Thank you for trusting me with those. I am blessed with the privilege to have been awarded recognition around the industry.

See some of the awards I'm very proud to have been selected for. 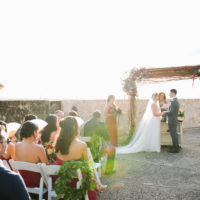